Rick: Well, are you going to let us win?

Bambi: No, of course not, the posh kids win, they always do. Come on.

So, it would that despite our best efforts, Rein’s magnum opus, “I Don’t Get Anything But Shit From You” is tragically NOT 2016’s Song of the Summer.

Apparently, according to the website above, the 2016’s Official Summer Song is Chance The Rapper’s “No Problem” (feat. 2 Chainz & Lil Wayne). I don’t know about you folks, but that song didn’t even crack my top 500 songs of 2016’s summer.  I get the feeling that anyone who voted for that song is REALLY excited about the possibility of getting a craft Popsicle store in their neighborhood.

Since there’s now way in Hell that I’m gonna post a the video for “No Problem” (Nothing against Chance, put I’m sure he’s getting enough publicity), here’s a cool new 3Teeth video…

As a ZZZ-list celebrity, I give so much and ask so little. That’s why, on those rare occasions that I do ask you folks to help out, you know it’s something serious.

I really, really, really need all of you go to this URL and enter “Rein” under Artist & “I Don’t Get Anything But Shit From You” under Song (Please see photo):
http://www.stereogum.com/…/v…/franchises/song-of-the-summer/ 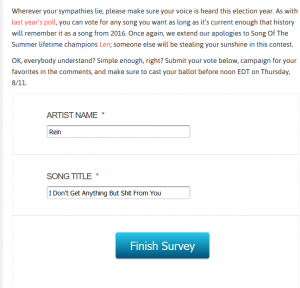 Don’t do it for me. Don’t do it because “I Don’t Get Anything But Shit From You” is a fun little angry song. Do it because the people who’ve been posting in comments section of the poll are UNSPEAKABLE MONSTERS! Don’t believe Me? OK, here’s an actual quote:

“Nice, but I’m gonna have to go with ‘Because I’m Me’ by the Avalanches. That song breathes summer.”

If that songs breathes summer, then I want to be the one to hold a pillow over its face until it STOPS breathing summer. Or anything else, for that matter.

If you’re like me (and these days, who isn’t?) you live in a city whose airwaves are dominated with shitty Alt-Rock. This means that WE have to hear THEIR music, but THEY never have to encounter OURS. We have to consistently endure their upbeat Poptomist   anthems, but they rarely, or ever, get a taste or our angry songs. Well, “Project Rein Down on Yo’ Ass” hopes to address that issue one poll at a time.

And just what a shock it will be to these people to hear an angry female voice. I swear by God and a dozen other mass murderers, that Hipster are the most gender-normative subculture since the Birchers . Think about it. All of their men look like lumberjacks and are into bacon and all of their women are doe-eyed knitting enthusiasts who speak in squeaky child-like voices. If you saw that shit in a horror movie, you’d flee from the theater.

Many, many years ago, an acquaintance of my got burned on a coke deal so he got his shotgun and drove to the dealer’s corner only to find it occupied by four dudes sporting Uzis. Vastly out-gunned, my neighbor just set low in the driver’s seat, then drove for about half -a-block before fire his gun into the air. “I just wanted them to know I was thinking about them”, he would later explain.

So, there you have it. Like my acquaintance, we too are vastly out-gunned. but that doesn’t mean we can’t make a little noise from time-to-time just to let other folks know that we’re thinking aout them.

So let’s get going; there’s no other choice. God willing, we will prevail, in peace and freedom from fear, and in true health, through the purity and essence of our natural fluids.