There’s no need to be confused! Go here and read the preface to the first experiment.

Experiment Three: Home
Since the first two experiments resulted in very few actual scares (I should admit that neither Vienna nor I frighten easily. So, if you’re the type of person who has nightmares after re-runs of Friends, your results for this experiments will differ greatly from ours)  I decided to fall back on something that I remembered as being scary as Hell – A 1996 episode of The X-Files called “Home“. 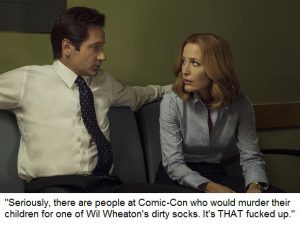 For many people, Vienna & myself included, Friday night in the early to mid-90’s was synonymous  with the X-Files. No matter what was going on in your life, come 9 PM, you stopped whatever you were doing and watched the X-Files. If your home burned to the ground at 8:30 in the evening, killing your entire family, by 9 PM you were sitting on your neighbor’s sofa listening to the show’s  intro music. That’s just how we all rolled back in the 90’s, folks.

Looking back,  The X-Files was not a really great show. Don’t get me wrong, it wasn’t bad; it’s just that the few episodes I’ve stumbled upon in the past couple of years didn’t hold up very well. I guess the real reason that we were all glued to our TV on Friday night at 9 PM was because the X-Files, for all of its flaws, was at least better than all of the shit that was on TV in the early 90’s. And when I say “shit”, I’m being kind. I could devote thirty paragraphs to hurling insults at televised feces like Home Improvement or Everybody Loves Raymond. The fact is that TV in the early 90’s just plain sucked. 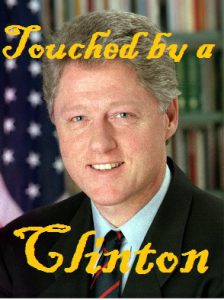 Maybe that’s why “Home” had such an impact on me when I first watched it. This might be hard for people who’ve come of age in the era of American Horror Story to grasp, but “Home” was like nothing that had ever appeared on TV previously.

If you’ve never seen the episode (it’s available on Netflix), you’ll be impressed by home much black humor and mind-blowing what-the-fuck-isms the writers managed to cram into just the opening 15 minutes alone. Yes, that dead baby sure does get around!

Unfortunately, the producers of the X-Files didn’t dig all of the dead baby humor; they felt that the episode “had gone too far”, and Fox  banned it from ever being re-aired on their network. Yes, the very same network that would later give us The Littlest Groom.


For a piece of horror to be really effective it has to contain That Scene. A scene so scary that you never forget it. It’s the one scene your mind instantly goes to when you think of the piece. In The Haunting, That Scene is the one wherein Eleanor thinks she’s holding Theodora’s hand, but…well, you know. Here’s That Scene in “Home“. It does for “Wonderful, Wonderful” what A Clockwork Orange did for “Singing in the Rain” and what The Littlest Groom did for Humanity.

So, now it’s time to apply our highly scientific scoring method to the episode.

Vienna gave “Home” 5 Barnabi and 8 Ormsbys. I gave it 6 Barnabi (That “Wonderful, Wonderful” part is the stuff of nightmares) and a whopping 9 Ormsbys for a final total of: 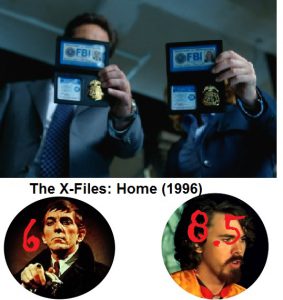 I’m going to leave you with one disturbing bit of trivia about “Home“.  Writer Glen Morgan ‘s inspiration for the episode came, partially,  from an incident which Charlie Chaplin documented in his autobiography.  A young Chaplin had been staying at a miner’s house. Following dinner, the miner said he had something to show Charlie. That something was a man with no arms or legs who had been sleeping in the kitchen cupboard.

A half man with no legs, an oversized, blond, flat-shaped head, a sickening white face, a sunken nose, a large mouth and powerful muscular shoulders and arms, crawled from underneath the dresser … “Hey, Gilbert, jump!” said the father and the wretched man lowered himself slowly, then shot up by his arms almost to the height of my head.

“How do you think he’d fit in with a circus? The human frog!”

I was so horrified I could hardly answer. However, I suggested the names of several circuses that he might write to.

Next time: The once mighty nation of Brittan collectively loses its shit.

If you’re wondering just what the Hell is going on here, please check out the preface to first installment.

Greetings, Gothic Gherkins. Our second  experiment comes to us in the form of an episode of Roald Dahl’s Tales of the Unexpected.

Well, as it turns out, Roald Dahl’s dark side took up most of the real estate in his brain. Old Roald had a penchant for writing dark tales with really twisted surprise endings, in the vein of another famous writer – Saki (AKA H.H. Munro). [If you’ve never read Saki’s “The Open Window”, stop what you’re doing and READ IT NOW. I’ll still be here when you’re done.]

I hope you enjoyed that. And i hope you’ll enjoy this. When you’re done watching it,  see if you agree with our rating…

This was a tough on to rate because I really wanted to like it a lot more than I did. On the positive side, it sets up a nice creepy atmosphere early on and manages to keep it up it throughout the entire episode (and this in an age before Viagra). Unfortunately, you can spot the surprise as it slows down to seven miles an hour  on it’s trip through Dallas.  So I suggest that we applaud it for intention if not execution.

Vienna gave it 2 Barnabi and 5 Ormsbys. She agreed with me that, although it was short on fright, it was long on creepy, leering fun. I thought it was a little scarier than Vienna did (the last few minutes…the corpses!) and concurred on the level of fun, giving The Landlady a score  of 3 Barnabi and 5 Ormsbys.  This gave the episode a final total of… 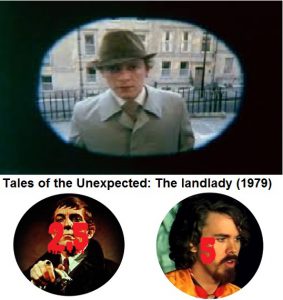 Next time: Pennsyltucky is for Lovers.

Here in Philadelphia, there are only two holidays: Halloween and getting’ ready for Halloween. While the average Philadelphian is thinking about Halloween all year long, serious preparation traditionally begins on August 31st: the day on which Mary Ann Nichols, the first of Jack the ripper’s canonical victims, was murdered. 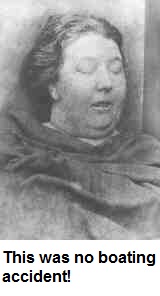 And that’s why I’ve chosen today to launch an experiment called “I Just Wanna Give You The Creeps”. This experiment has one clear, yet highly subjective, goal: To find the most frightening thing ever created to for the sole purpose of being aired on television. The only rule is that it had to have been created for the small screen with the intention of spooking the Bejezuz out of any viewers who might encountered it while channel-surfing. If it was created with theatrical release in mind, but ended up on TV instead, it doesn’t count. Nor do straight-to-video/DVD releases qualify. “Bud Dwyers” are also ruled out as they are generally unplanned events.

Now that I had a rule (more like a guideline, really), the next thing I needed was a test subject. I took inspiration from Pierre Curie and enlisted the aid of my wife Vienna. As long as I didn’t accidentally rest my naked forearm on a radium salts-covered desk, we should both be fine and greatly enlightened at the conclusion of the experiment.

The final piece would be a system for evaluation the effectiveness of the material we’d be viewing. After much discussing and a precautionary check of the entire house for radium salts, we settled on a two-fold rating system: 1) Was the material frightening? And 2) Was it entertaining? Fright would be measured using a 1 to 10 Barnabas Collins scale while entertainment value would be determined using a similar scale of  1 to 10 Alan Ormsbys. Each of our scores would be shown separately and then averaged for a final result. For example, the 1955 Halloween episode of “I Love Lucy” in which Ricky Ricardo’s conga drum solo unleashes a voodoo curse which turns Lucy into a ravenous zombie who devours guest star Tennessee Ernie Ford is certainly entertaining, yet it could hardly be considered frightening by today’s standards. Vienna gave it 1 Barnabi and 8 Ormsbys while I gave it 3 Barnabi (that scene where Lucy bites into Fred Mertz’s arm still gets me) and 6 Ormsbys. Therefore its final score ended up being 2 Barnabi and 7 Ormsbys. 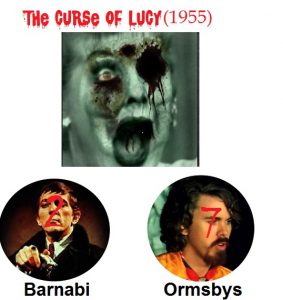 Experiment One: Pigeons from Hell (1961)

Our fist experiment involved an episode of the Boris Karloff- hosted anthology series “Thriller”. The production was based on a short story by Robert E. Howard who wrote the Conan the Barbarian books and who also, ironically, pulled a Bud Dwyer sans live TV coverage. Here’s the entire episode, if you’d like to partake in the experiment along with us.

So how did Pigeons from Hell hold up under our rigorous standards?  Not very well, unfortunately. Vienna thought that episode was almost completely devoid of scares and that, although it might have made for exciting entertainment fifty-five years  ago – when it originally aired – time had not been kind to Mr. Howard’s pigeons.

I, in turn , agreed with with Vienna that the episode was about as frightening as a installment of “Tiny House Nation“, but I derived twice as much entertainment from it. Maybe I’m just a sucker for Southern Gothic, but what I really liked was the way the screenwriter managed to cram so much strangeness and taboo subject manner (by 1961 standards) into fifty minutes of television. Bravo, you twisted radium salts-sniffing bastard!

My score for the show was 2 Barnabi and 4 Ormsbys, giving Pigeons from Hell a final total of… 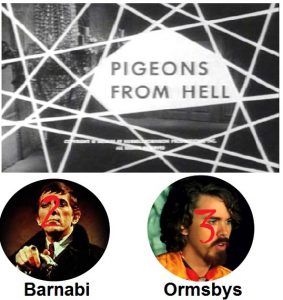 Next time, we’ll check in with an episode of Tales of the Unexpected…which you are now totally expecting. And please contact us with any suggestions for TV shows you’d like us to check out.