Currently, life out there is hard for musical acts, and it’s EXTREMELY tough for Underground musicians. Unless you sound like Seals & Crofts, the world of music is a very cold place to pitch your tent right now.

This week, at least three really great bands whom I follow announced that they either had to cancel a tour or hold a fundraiser because they were experiencing financial difficulties. Now, I’m not about to ask you to help them financially by pledging to their drives (Although, if you do, that would be great); what I’m asking won’t cost you a cent, and will only take a few seconds of your time.

The overwhelming majority of the musical artists whose work I post, or whose live shows I recommend are currently considered too weird, dark, political or any combination of those three for mainstream acceptance (Translation: You won’t be seeing Pretty Addicted on the Jimmy Fallon show anytime soon). That’s a problem which is going to a while to fix. In the interim, here’s a Band-Aid for this musical boo-boo.

If I post a song by an underground band (or any band, really, but an Underground band in particular), please it share the video/song/club date or hit “like” on the artist’s Facebook page. That’s it. It only takes about six seconds of your time (yes, I’ve actually done the calculations) but it might mean the world to a struggling artist.

And if you post a video/song/club date for an Underground artist, please ask people to share the info or swing by their page & give ‘em a Like.

That’s it. Other than making that golden calf statue, this is all I need.

As a reminder of the Six-Second Rule, here’s Ayria with “Six Seconds”

God willing, we will prevail, in peace and freedom from fear, and in true health, through the purity and essence of our natural fluids.

Thank you and have a Happy Halloween.

Our story so far: Inspired by Ashbury Height’s “Skeleton Tree” experiment, I decided to do the unthinkable – release five of the dozen or so demos I’ve sent to the other Milkmen over the past year. I’ve  already posted “Her Name is Witch” , “Billy Wants a Voodoo Doll” , and “Hillbilly with a Meat Cleaver”, and Only The Dead Get Off At Kymlinge.  The final entry into the Halloween Demos pantheon is a cover of Rush’s “Witch Hunt”….No, seriously; it’s a cover of Rush’s “Witch Hunt”

Why? Because US & European politics over the last year got me thinking about xenophobia and the exploitation of the fear of “The Other” and this song has some of the most PUNK ROCK lyrics ever written on that subject.

Those are great lyrics. As are the closing lines:

As for the cover, well, when you’re attempting to convince the rest of your band to cover a Rush tune, a lot of effort is involved; hence all of the sonic oddities.  If we were to ever tackle this one, I’d push for using a female vocalist because women can sing in a much more pissed off manner about injustice than men ever will be able to.

By the way, his is the song that got me started down the road to The Halloween Demos. I was in my studio one Sunday looking for a way to kick-start an afternoon of songwriting when the idea of covering this song popped into my head. I do that, from time-to-time: cover a song to see if it leads to writing an original one, or if there are any sonic motifs from the cover that I can cannibalism into an original tune.  Anywhoooo….after i started working on this song, I thought “Why not write some songs about witches and witchcraft?” “Here Name is Witch” & “Billy Wants a Voodoo Doll” were written shortly after that.

Well, i guess there’s not much else left to say other than maybe I’ll do this agin next year (on a much smaller scale) and, of course, Happy Halloween.

Our story so far: Inspired by Ashbury Height’s “Skeleton Tree” experiment, I decided to do the unthinkable – release five of the dozen or so demos I’ve sent to the other Milkmen over the past year. I’ve  already posted “Her Name is Witch” , “Billy Wants a Voodoo Doll” , and “Hillbilly with a Meat Cleaver”.

My philosophy of demos uses to be that I should strive to make the demo sound as much like a finished, polished song as possible. Hell, I even mastered a few of ’em before submitting them to the rest of the band. Don’t do that. Just get the basics and move on. The hours you invest in  getting just the right snare sound on a demo is time that could’ve been better spent songwriting.

“Only The Dead Get Off At Kymlinge” will obviously need some extra work if it’s ever to see the light-of-day as an official Milkmen song (I should switch “Now I’m drinking champagne” to “Mixing trains and cocaine” as well as replacing that “Stop freaking me out” part). That said, i think that this demo still has all the basic elements for success. Plus, it’s based on the the greatest Urban Legend of all time: The story of the Silverpilen.

Back in the 1960’s, the city of Stockholm purchased some new green commuter trains and, apparently, the company which manufactured the trains tossed in an unpainted, silver demo model into the bargain (see, never spend too much time on your demos!).

Well, the Stockholm Metro network decided to not bother painting the Silverpilen (“Silver Arrow”) and to not put up and advertisements inside of it (If you’ve ever ridden the subway or a commuter train in the states, you know what I mean). Then they decided to run the train only late at night to maximize the number of drunken Swedes who would encounter it.

Around this time Metro also abandoned work on the what was to be a new station at Kymlinge – effectively creating a semi-complete “ghost station”.  So, drunken Swedes + mysterious late-night train x ghost station = the Urban Legend that people who boarded the Silverpilen would be taken to the Kymlinge stop and hacked to pieces.

Our story so far: Inspired by Ashbury Height’s “Skeleton Tree” experiment, I decided to do the unthinkable – release five of the dozen or so demos I’ve sent to the other Milkmen over the past year. I’ve  already posted “Her Name is Witch” and “Billy Wants a Voodoo Doll”. I’ve accelerated the releases a bit as some folks have taken notice of them.

Hillbilly with a Meat Cleaver was not inspired by American Horror Story’s  “Butcher” character (Although I do live that show and Kathy Bates is a joy to watch in that role – she’s really getting into it), but by Eric Powell’s brilliantly twisted  “Hillbilly” comic books. (“The Devil’s Cleaver will suffer no witch!”).

Our story so far: Inspired by Ashbury Height’s “Skeleton Tree” experiment, I decided to do the unthinkable – release five of the dozen or so demos I’ve sent to the other Milkmen over the past year. On Friday night I posted “Her Name is Witch”.

Billy Wants a Voodoo Doll was inspired by the much more disturbing “Billy Wants a Doll” from Marlo Thomas’ 1970’s “Free To be You and Me” special. All I really remembered about the original song was my dad’s comment that Billy probably didn’t live in a steel-town.

Anyhooo, I always wanted to write a song about New Orleans, so here it is…

I’ve probably written fifteen or sixteen songs this year. Of those, I’ve submitted at least a dozen to the Milkmen as demos. Out of those five or six will probably land on the next Milkmen album if I’m lucky.  That’s the way songwriting works in our band: everybody writes and  submits songs (or parts of songs) and we keep a few and the rest are never heard form again. It’s pretty much the same process the Duggars use to decide which of their children they’ll allow to live.

Normally, I don’t share my demos with people outside of the band. This is because the songs always tend to sound better after the other guys contribute to them. Or, in the case of the songs that get scrapped, I relieved that I was sparred the embarrassment.

That said, of all the songs I’ve submitted in the last few months, five were of a particular spooky nature. These I’ve christened “The Halloween Demos”.

The first of the lot is “Her Name is Witch” which was inspired by a radio play about former witches being reprogrammed as witch-hunters. 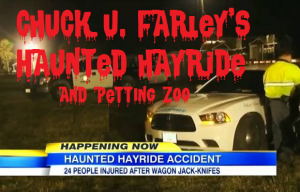