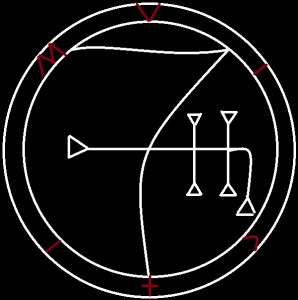 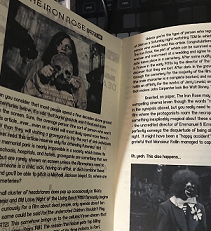 It’s a link to the print it; fold it; staple it your own damn self version of the first issue of 7-Zine. The official publication of the 7th Victim Society.

The Story of 7th Victim

The year was 1976. The place was Stocksbridge, then located in England’s unfashionable “Uncanny and Disturbing Mist District.” It was at this time and in this place when four fresh-faced lads – Martin Watt, Philip Oaktree, Arnold “Fig” Newton, and Wolfgang “Gunther” Blitz – who had recently graduated from the Steel-Peech College of Industrial Arts decided to form the band that would, eventually, become 7th Victim. 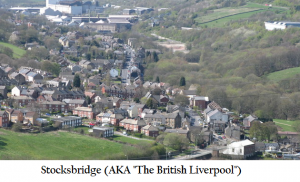 “One day in the spring of 1976,” recalls Martin Watt, “Philip [Oaktree] showed up at my front door with two albums under his arm. This was back when I lived on Rundle Road – long before they built the A616 bypass – so Philip would have had to take the B6088 and turn off at…Excuse me? Oh, sorry. Anyway, the first album was Donna Summers’ ‘I Feel Love’. I clearly remember Philip saying ‘We can do this! In fact, we already have!’ The second album was a test pressing of our first LP. It seems I had forgotten that, a few weeks early, Philip, Fig, Gunther, and I had had a few too many down at the pub, gone back to Philip’s place, and recorded an album. It was a different time.”

With their first album already recorded, the band was in dire need of a name. “We had purchased a Science Fiction board game for a friend,” said Oaktree in a 1980 interview with Insufferable Keyboardist magazine. “It was called ‘StarForce Alpha Centauri and the rules completely impenetrable. You couldn’t play it …Excuse me? Oh, sorry. Anyway, one of the scenarios was called ‘The Rise of the Human League’, and I thought what a cool name!. So we became ‘The Rise Of’.”

The band continued to perform as The Rise Of until the summer of 1978 when they shared a bill at Eric’s Pub and Rending Plant with The Fall. As Watt told the story in the documentary “Fook It All: The Story of the Stocksbridge Sound”, “We were approached after the show by Mark E. Smith who said the name The Rise Of sounded too much like the name The Fall and that if we continued to use [The Rise Of], he would kill us and every member of our immediate families.”

After rejecting several names suggested by Blitz, including “The New Baby-Killers”, “Pet the Rabid Dogs”, and “Death In June”, the band finally settled upon “7th Victim” despite being completely unaware of the existence of a 1943 film by the same name.

Unfortunately, it was Watt’s mum who answered the phone. She forgot to take a message.

This time it was Martin Watt, himself, who answered the answered the phone, and the band found themselves scheduled to appear on the February 6th, 1981 episode of Top of the Pops. The call their performance disastrous would be tantamount to calling the sinking of the Titanic a “whoopsie”.

Blitz’s behavior, both onstage and off, had become increasingly erratic during the previous several months. Something which Martin Watt would later attribute to Blitz’s experiments with drugs. “He was taking two – sometimes three – aspirins a day”, recounts Watt. Just a few weeks before the TOTP gig, Blitz had abandoned his keyboards during a set at Eric’s, wandered into the and shouting insults at the audience such as “Are you attempting to dance, or did you step on a Lego?” as well as berating anyone in attendance who was unable to provide Kierkegaard’s middle name.

“We thought about un-inviting Gunther from the Tops of the Pops performance,” Watt would later say in a 1988 interview conducted shortly after work on the A616 bypass had been completed. “But did The Beatles drop Paul after he killed all those puppies? No they di… You didn’t know about the puppy killing?”

While the rest of the group dutifully mimed along to “Don’t go Outside and Never Talk to Anybody” (The only song by the band to reach the Top 30 in the UK), Blitz disappeared from the stage, turning up in the dressing room area where he began hurling derogatory remarks at the furniture and at fellow Synth-Punk pioneer Kim Wilde, who was appearing on TOTP to promote her radical, anti-authoritarian anthem “Kids in America.” Wilde dragged Blitz into the alley behind the studio and pummeled him so badly that he was unable to perform musically ever again. He would later go on to join Haircut 100 and then Radiohead. 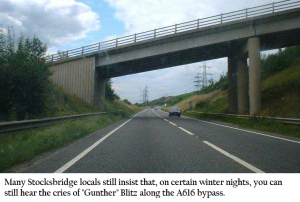 With their most interesting member now out of the picture, 7th Victim called it a day, taking the M1 and then the A61 back home to Stocksbridge, reuniting only twice during the next three decades: first in 1985 for an appearance at Live Aid during which they performed an ill-advised medley of Queen songs, and then again 1996 as part of the “We Had A Hit. Honestly, We Did.” tour featuring Tim Curry, Dead or Alive, and Prince Charles.

Just as it seemed that 7th Victim would forever be consigned to be a footnote in the history of rock ‘n’ Roll, Fate intervened in the form of one American synthesist know as Rodney Anonymous (whose name, coincidently, means “fate” in Welsh). Anonymous had contacted Martin Watt via email in regards to purchasing a used MiniKorg 700S which Watt had recently listed for sale in the Stocksbridge Gazette. According to Anonymous, “There was some sort of mix-up with the paperwork. I ended up buying the rights to the band’s name and their entire back-catalogue for less that I was planning to pay for the MiniKorg. Weird shit, huh?”

The Truth
7th Victim is my solo project. I don’t talk about it much.